The Search For Mighty Good EDI

Popular, revered products solve a universal problem or have basic human appeal, whether it’s a phone that takes great photos, clothes that make us look better, or a sauce that adds just the right amount of heat to that burrito.

How about a mug that prevents us from spilling hot coffee in our lap?

When Jayme Smaldone started Mighty Mug with his father, he was confident he had a winner — the mug would grip the surface it was on to prevent spills but lift up when someone wanted a drink. The product solved a problem that has been around for as long as, well, people have been drinking out of something other than a stream.

With the Mighty Mug design in place, the next challenge was convincing major retailers to put it on their shelves.

The Mug is mightier than a $20/night hostel.

Shortly after Jayme landed his first big order from Target, he learned that he needed EDI, and he had zero idea what EDI even meant. Other retailers, including Bed Bath & Beyond and OfficeMax, wanted his product, too. What’s more, he was working feverishly to ramp up production. Managing EDI was not an effective use of his time, and he needed to find a provider ASAP.

In a jam, Jayme reached out to one of the largest EDI providers, a company that touted its capabilities based on its share of the marketplace. Mighty Mug signed on and started to deal with EDI. It was a normal human reaction — faced with a knowledge gap and a time crunch, choosing a large provider seems like a safe, smart choice.

The problem? Mighty Mug was a bootstrapping startup, working hard to establish a foothold in the retail world, and they were a small, underserved client at a huge corporation.

“We started with one of the largest EDI suppliers in the country, and it was an absolute nightmare,” Jayme recalls.

Jayme wanted to focus on growing the company and serving his customer base, not managing the details of EDI. For a business person used to making the most of every second, spending hours of time managing EDI was intensely frustrating.

Realizing his EDI partner was a bad fit, Jayme began investigating other options. After a careful review, he began to work with eZCom. He’ll attest that the change was, well, mighty big.

“To tell you the truth, I don’t even deal with EDI anymore. It’s so easy, I taught someone else to do it,” Jayme notes. “Something that would literally take three days to do now takes us about 15 minutes.”

What’s more, Mighty Mug never feels like small potatoes at eZCom. Whenever there are issues, our first-rate customer support team is ready to help resolve them. For the first time, Jayme feels like he has a true partner to manage EDI efficiently and quickly, and help him avoid costly chargebacks.

For a classic entrepreneur who moves quickly and boldly, dealing with the sometimes tedious details of EDI is definitely not the way he wants to spend his days. Our EDI expertise saves all kinds of time for everyone at Mighty Mug, freeing them to continue to build on the success of their brand.

Get the EDI that fits you to a T.

The rush of getting new orders can quickly be replaced by feelings of frustration if managing EDI becomes an unwieldy challenge. That’s why it’s so important to choose a provider that fits with your company.

At eZCom, we love success stories like Mighty Mug, and we always look forward to helping entrepreneurs and their companies grow. 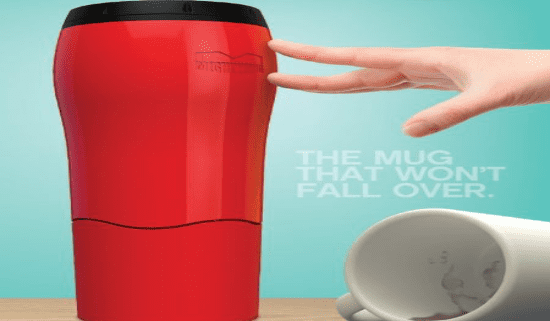 To learn more about the incredible Mighty Mug — and get drinkware that won’t fall over — visit https://themightymug.com.

Because these cookies are strictly necessary to deliver the website, refusing them will have impact how our site functions. You always can block or delete cookies by changing your browser settings and force blocking all cookies on this website. But this will always prompt you to accept/refuse cookies when revisiting our site.